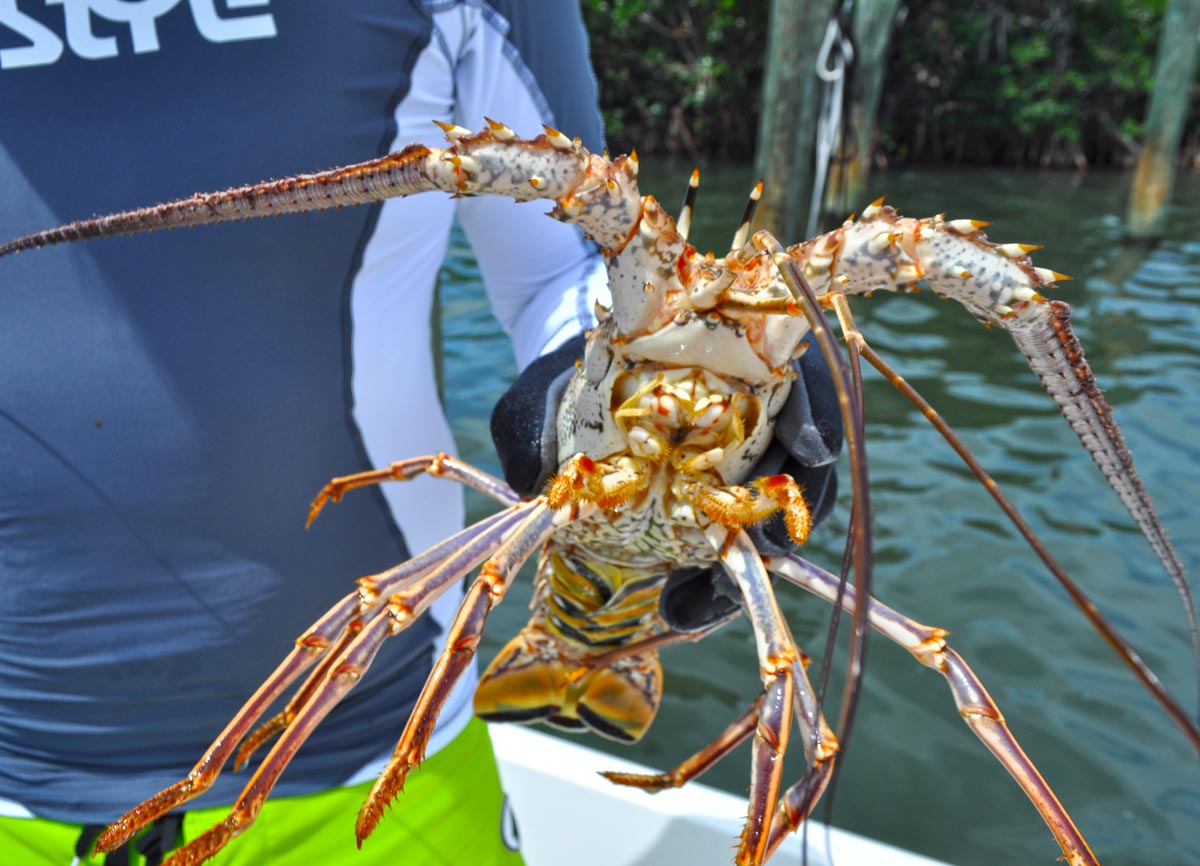 Florida’s Keys offer phenomenal Lobstering. According to Floridagofishing.com, in July, locals become contagious with a fever, “Bug Fever.” Anglers buzz over the possibility of snaring Lobster, referred to as Bugs. Moreover, it’s said that “Islamorada is home to the Florida Lobster.” Some of the heftiest Lobster on record were snared in the glass-like waters that surround the Keys. Additionally, Islamorada boasts possession of the World’s largest Lobster, Lobster Betsey. However, you can’t eat this Lobster, Betsey is a fiberglass roadside attraction.

Large Lobster awaits your net, beneath the region’s gentle waves. Larry the Lobster, a 110-year-old specimen, was trapped by a local Lobster Vendor and spared the boiling pot to live his days out in an aquarium. The Lobster weighed 17 pounds. Although the average Spiny Lobster pulled from Florida’s waters weighs 1 pound, there’s record-breaking crustacean below the waves. Many of the World’s largest Lobster were pulled from these waters, documented or otherwise.

It’s said the cloak of night makes for a plentiful catch; Florida’s seafloor wakes with the setting sun. According to Floridagofishing.com, Lobsters are nocturnal. These Florida natives may be easily seen during the night as they scour the sea floor in search of their next catch, they’re natural anglers. However, Lobster hide among the coral during the day.

It’s important to possess the correct permits before snatching one of the Key’s colossal Lobster. According to the Florida Fish and Wildlife Commission (FWC), a Recreational Saltwater Fishing License and Spiny Lobster Permit are required to trap Lobster. Additionally, the angler must measure the days catch: Lobster must be 3” or more in length. Moreover, it’s not lawful to harvest egg-bearing females. The Miami Harold reported jail time and fines for anglers recently caught harvesting Lobster without the proper permits. Of course, with a local guide, all of your requirements are met during your lobstering charter.

There’s more than one way to catch a Lobster! Many saltwater anglers deploy a Tickle Stick and a net to snag this delicious crustacean. Tickle Sticks are usually made of Fiberglass, they come in a variety of sizes and can be purchased for as low as $1, although a spring-loaded model may cost as much as $45. Many anglers prefer a Snare to catch a Lobster by the tail. Snares are Lobster catching lasso. The loop of the lasso is placed around the tail, the angler pulls the trigger and snap, the Lobster is ready for the net. Lobstering may be done via snorkel or scuba.

Anglers have pulled record size Lobster from the waters that surround the Florida Keys. The region is abundant with Spiny Lobster. These delicious crustacea may be snared throughout the day or night. Moreover, the region’s possesses a unique culture, it’s said to be the best of the Caribbean and Mainland.