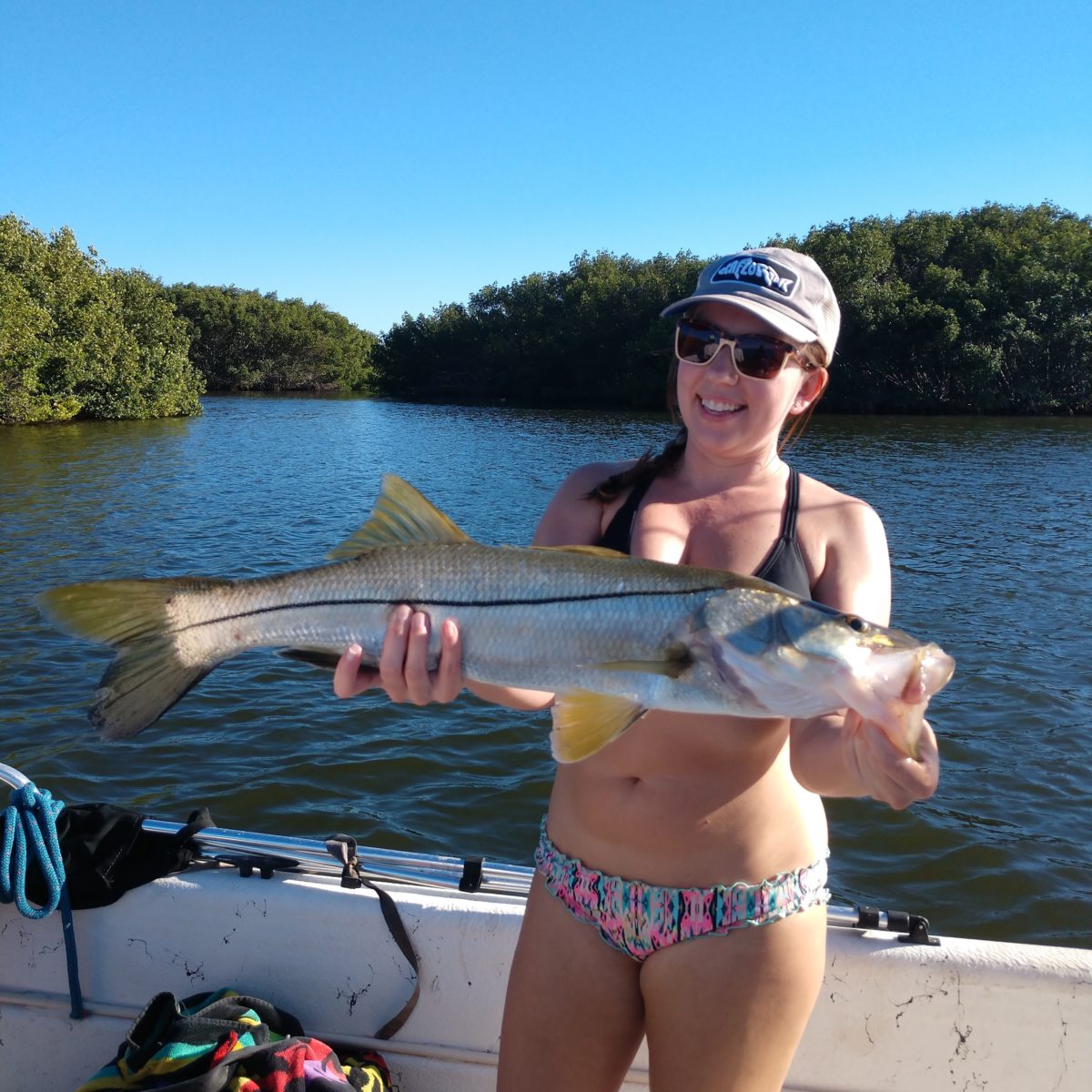 Florida’s pristine Gulf Coast is home to world premier Snook fishing, Tampa. It’s said that Tampa is an angler’s paradise! Tampa’s Snook gather among the mangrove-lined shores. Mangroves provide a year-round habitat for these aggressive fish. Snook may also be reeled-in from docks, bridges and among artificial reefs. The joys of Snook fishing in Tampa are unparalleled.

These tropical fish are a prized catch of the Tampa angler. Tampa’s Snook can grow up to four feet in length. Snook adorn two dorsal fins. The dorsal fins glint silver and neon yellow in Tampa’s crystal clear waters. Additionally, the fish’s body is often a tarnished silver with a black horizontal stripe. It’s not uncommon for Snook to weigh eight pounds, though most weigh around six.

Snook may also be referred to as Robalo and are commonly encountered inhabitants of the Atlantic Ocean. However, most are unaware that Snook are not one species, but eight. According to Fishidentificationblog.com, there are few differences between these eight species that are called Snook. The species under this nomer possess a different number of gill rakers, but little other variation. If you reel-in a large and aggressive silver fish with two dorsal fins and a black lateral line, it’s most likely a Snook.

Snook may be caught throughout the year, however, they are most abundant during Spring. Snook are most easily lured during early Spring, Tampa’s Snook are less likely to bite during the dog days of summer, but expect to reel-in Snook during the evening. Snook will bite for both live and artificial bait, yet many vetted anglers insist that Pilchards and Sardines lure the most Snook. All anglers agree: the Snook is a hard fightin’ fish! Be prepared to sweat as Tampa’s famous fightin’ Snook gives a “hard run (Encyclopedia Britannica).” The region’s Snook are most noteworthy for their aggressive bite– Snook are prone to bite the bait, but don’t reel-in easy. An eight pound Snook may give an aggressive run; all the more fun for the angler.

Cooking Snook is a historic Floridian specialty. There have been issues in recent years that have lead to some population damage, such as freezes. In this, more and more anglers are releasing snook to live another day. However, FWC does allow for anglers to keep snook within certain limits and regulations. Snook can’t be bought commercially; you must catch and prepare your own if you decide to do so. One angler, in the archives of Naplesnews.com, states that “Snook are one of the best dining treats in Tampa, […] if you want to have a taste of this delicate, sweet fish, you have to catch it yourself,” he goes on to say “just be sure to prepare the snook skinless, the soapy flavor of the skin will spoil the delicate flavor of the meat.”

The joys of Snook fishing in Tampa are unparalleled. These fish give hard runs, they’re fighters, and the excellent tasting meat and Tampa’s clear waters make it all worthwhile.